The portfolio "Replacement Parts" contains examples from a period where I began to create a kind of alchemical medicine. All at once, it seemed, friends and family began to have illnesses of all sorts. I decided to create replacement parts for them.  Kidneys for Chad, who awaited a transplant; a uterus for Jean, whose cancer is at bay; an ear for Emily who went suddenly and inexplicably deaf in one ear; a heart for Bret whose failed him in his early forties, lungs for Sylvia and for Karl, each of whom had cancers that won, and so on.

While I was initially using extremely fragile materials in an effort to capture and examine the precarious division between a healthy cell and a dying one, I found that insect wings and sewn leaf skeletons deteriorated far too quickly. My ill friends needed sturdy parts... sturdier than what they received in the first round. I began to work with metal, and to encase the leaves and insects in resin.

As a bit of comic relief for myself, I began the series "Gifts from the Cats". Ironically, as I was giving body parts away, true viscera started to be given to me. Primarily insects and mice, with the occasional rat or bird, my felines provided the medium. They are now imbedded in resin, enigmatic and perfectly preserved jewels. Frozen in time. The two lines of work--the creation of replacement parts and the preservation of the remnants of death--have become intertwined. 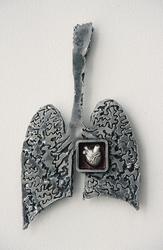 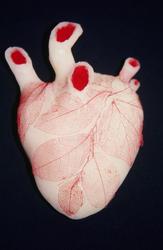 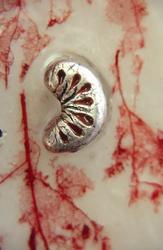 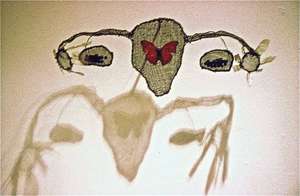 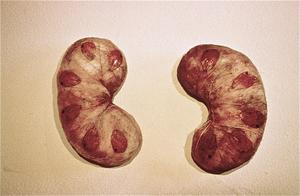 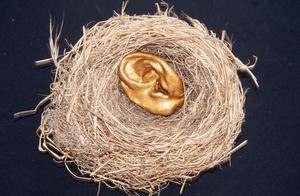